Some background on Pdf Reporting in the .Net world…

There have alwasy been a myriad of approaches to do this, but initially in the .Net world the primary way was to use some reporting tool such as Crystal Reports, or SQL Server Reporting Services, or even a third party control… But all of these tools have some limitations making the job of generating high quality printable PDF outputs harder than it would seem. And all of them eventually fall into the ‘technical debt’ hole as code that is no longer supported, not scalable, and/or just no longer sufficient for a variety of reasons; most of which is due to the tight coupling of data with the reports, limitations of the report designer tools (UI/Controls), or tech-stack supportability/burdens. A key example of this is Crystal Reports whereby the COM interop element is still to-this-day plagued with memory (leak) issues, and it can’t be used in modern .Net Core apps, etc.

Suffice it to say that markup based solutions have a lot of value, and Xsl-FO is still one of the best ways to maintain strong software development practices by rendering PDF outputs (as a presentation output) from separated content/data + template. And Xsl-FO offers features that some approaches just can’t do (looking at you Crystal Reports).

Enter ApacheFOP…a supported, open-source, full implementation of an XSL-FO processor in Java, that has continued to have regular updates/enhancements over the years. At one of my clients, the technology stack was fully Java based, so the use of Apache FOP was a no-brainer. And, on this project we were able to retrieve our data, transform it via XSLT, and render great PDF outputs that were streamed to the client on demand – it just worked!

But in the .Net world it hasn’t been that easy. For many years, there has been a .Net C# port (fully managed code) of Apache FOP called FO.Net; based on a pre-v1.0 version (is my guesstimate). It’s old & unsupported, but still fairly functional, and I’ve used it very successfully on several projects that were in use for 8-10+ years. But Apache FOP is now on v2.6 as of Jan 2021 with annual/bi-annual support updates still being released!

And, for a long while now I’ve known that the current FO.Net implementation was limited by the fact that it was created circa 2008 and is now an archived CodePlex project. But to be honest it has worked incredibly well, and reliably. As a fully managed C# solution, it ran in web projects as well a WinForms projects where users were able to view the rendered PDF live in the app, with real-time render updates (constantly updating the render and loading into Acrobat PDF Reader embedded viewer). It provided an wonderful user experience for a several of my projects.

But, as things have evolved the advent of cloud services has opened doors for accomplishing this in a much more powerful/scale-able/manageable way – particularly with Azure Functions and their excellent support for various technology languages including: .Net, Java, NodeJS, etc.!

So now on my newest projects I’ve been leveraging mini-services (dare I say micro-services) and serverless architectures, whereby PDF Reporting has, and will continue to be, a very critical requirement/capability. Now I’ve finally had the time to flush out the details of how to elegantly integrate the latest-and-greatest versions of ApacheFOP with .NET…. the result of which I’ve shared in an open source project named ApacheFOP.Serverless!

Let’s briefly touch on the overall architecture. The concept is simple if you’re familiar with services oriented development. With services you get abstraction and flexibility. Well in this case we want to take advantage of this flexibiliy to abstract away the details of how the XSL-FO is rendered to a Binary PDF, and all our .Net application should be concerned with is how it can use a client to send the XSL-FO markup and receive a valid PDF binary in return by calling an external service API – in the case of ApacheFOP.Serverless it’s a REST API (POST) request containing the Xsl-FO markup.

The PDF Rendering Service is able to facilitate this abstraction because Azure Functions allows us to run any Java application. So all we need to do is expose ApacheFOP functionality via a REST endpoint, and enrich the API by providing any additional functionality we want (e.g. support for Zip Compression requests/responses, Debugging capabilities, etc.)

Here’s the Conceptual diagram to help clarify any questions: 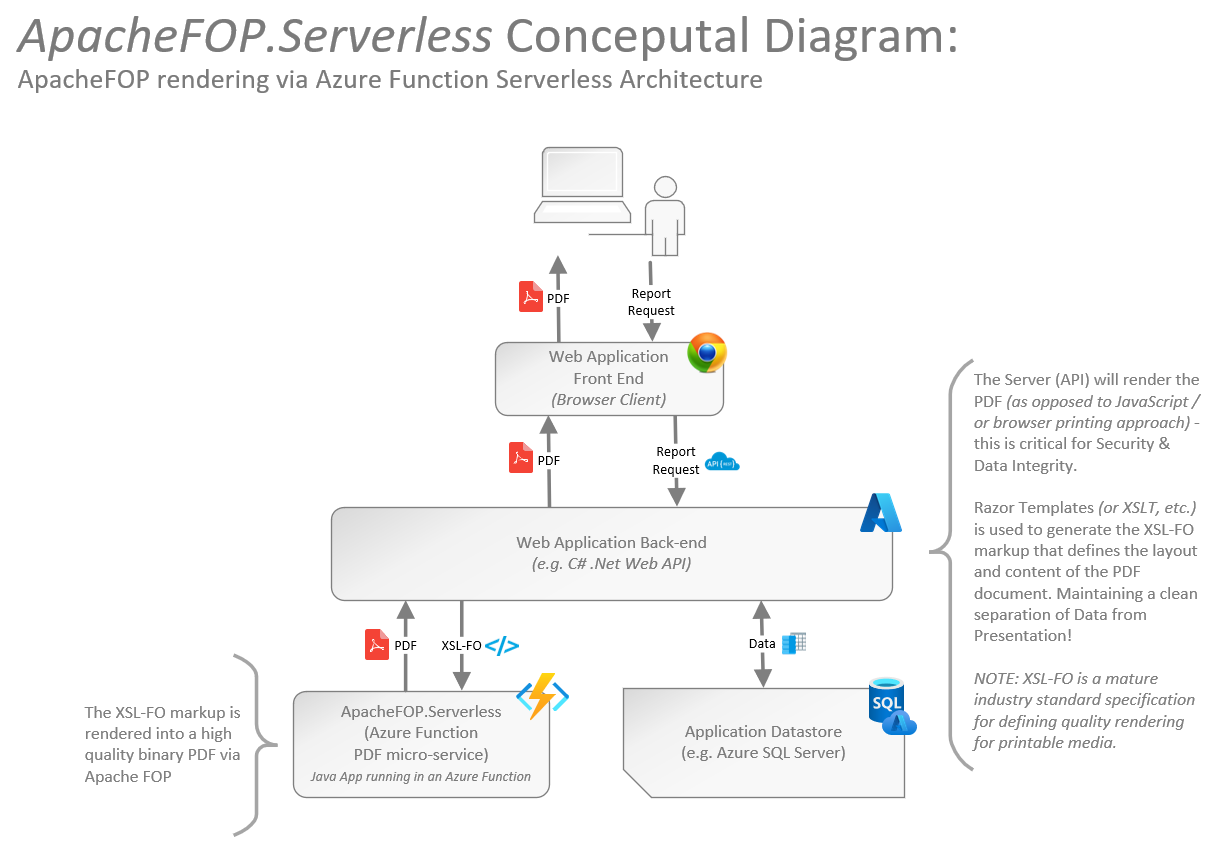 Tangent – Why Serverless with Azure Functions?

There are many reasons why servless architectures are great, and there are some cons too… but that’s a whole other topic that I won’t get into now. But as a project structure, Azure Functions are very flexible and can be deployed directly to Azure cloud in many different ways. With the latest version of Azure Functions, not only can you deploy directly to an Azure Function Serverless app, but you can also deploy the project as a containerized artifact, etc. So you have alot of control over the deployment style & infrastructure. So, effectively Microsoft has empowered you to choose your own approach which lets you take advantage of, or mitigate, whatever pros/cons you wish.

And Voila . . . we have a service that can be called to consistently render PDF Binary outputs, but is also highly scalable leveragin the Serverless architecture of Azure Functions. 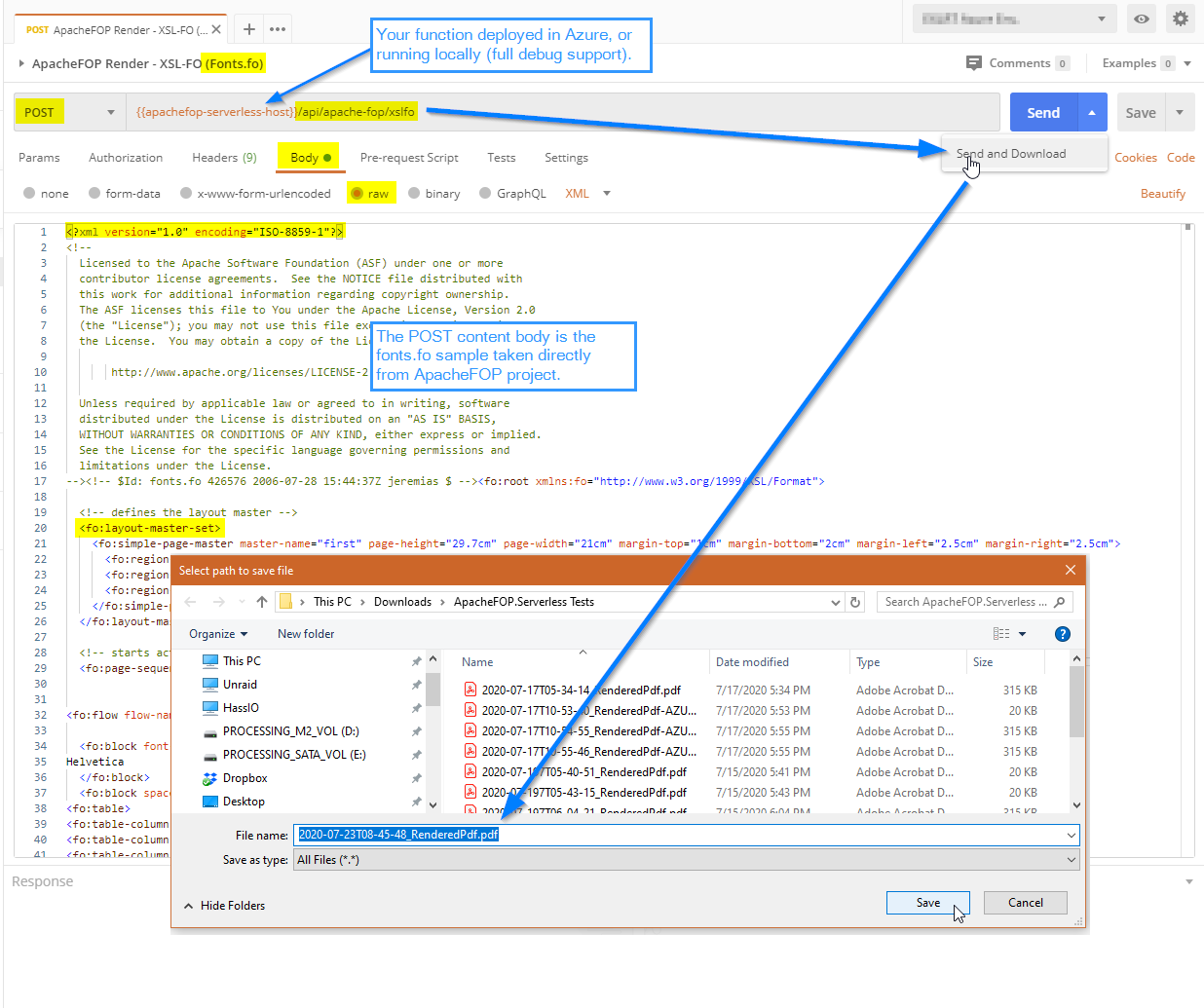 Ok, how do I get this running for myself?

To get this up and running in your own Azure account, there are details on the GitHub page here!

As mentioned earlier, the key to rendering this PDF is now abstracted away into the PDF rendering service. So now we are free to focus on our business requirements, and how we want to render the XSL-FO markup (which is just well formed Xml). There are many ways you can do this, but two of the most popular approaches are via XSLT or Razor Templating.

In the past, I used XSLT heavily, however this is much more of a niche skill that many developers don’t grasp and generally dislike. Therefore, in my recent projects I’ve opted for Razor templating approach which has garnered alot more favor by my teams – and I’ve grown to really enjoy even more due to it’s power & flexibility (e.g. partial templates & helper functions that provide the full power of C# into any template).

Again, the concept is not rocket science if you’ve ever worked with any form of MVC, MvvM, or just decoupling of your Model from your presentation:

This project encompasses more than I’m covering in this article, as it includes full demonstrations of creting the XslFO Markup via XSLT or Razor templates, as well as rendering the binary PDF using both FO.Net and ApacheFOP.Serverless.

But one of the key elements I do want to highlight is that project provides several libraries that are available on Nuget to make everything easier and a bit less complex.

I’m not going to go into much detail here, as this is just templating, but since I mentioned the Demo project above using, either XSLT or Razor, I figured I’d point out that the Nuget Packages are:

All the hard work of interacting with ApacheFOP.Serverless, and its advanced options for compression, debugging outputs from ApachFOP, etc. are all nicely encapsulated in the ApacheFOPServerlessPdfRenderService class – a .Net Standard 2.0 library.

I’ve talked about how easy this can be, but of course I’d be amiss if I didn’t provide at least some code here in the article to back up my assertions. So here is the abstraction/wrapper class that you’d add to your project to easily interact with the ApacheFOP.Serverless service. As you can see, the Nuget client makes it very straight-forward . . . and it just works!

But even if you didn’t want to take on the dependency, there’s really not alot going on as it’s fully REST based, so you could definitely create your own client using RESTSharp or Flurl (my new Favorite .Net REST Client & Url Builder)!

Some recent conversation on GitHub has helped me to realize that Visual Studio Code can run Java projects (Nice!!!), so I’ll soon integrate a project setup into ApacheFOP.Serverless for those that don’t want to have to rely on IntelliJ IDEA (which is still the best Java IDE available) as the Java IDE for running & publishing ApacheFOP.Serverless locally.

I truly hope that it helps many others out!